Every now and then a band manages to capture the sound of a city and convey its atmosphere in an intense and beautiful masterpiece.

Recorded in just one night at the Valentim de Carvalho studios near Lisbon and released in 1983 by the label Fundação Atlântica, “Amigos em Portugal” is a beautiful proof of the love and affection of this band for Portugal. “Menina ao pé de uma piscina” is the most remarkable example of how the band was able to put into music the whole Lisbon experience. With its weeping and powerful electric guitar Vini Reily managed to reproduce the lament and nostalgia of a fado guitar echoing in a dark alley of Lisbon, while a drum machine echoed the heartbeat of the city. Trips to Lisbon began after the successful launch of their second album “LC” with a handful of concerts for a crowd eager for new sounds. The nostalgia conveyed by the band matched perfectly the mood of the Portuguese saudade. The Portuguese seem to know how to identify a heartfelt song. This explains the success of bands in Portugal like Durutti Column, the remarkable success of Lloyd Cole and the Commotions who had here their number one fan base, the thrill of Radiohead’s first gig in Lisbon which the band claims was probably their best gig ever and the goose bumps felt by 30 thousand people in an open air festival by the sea during a Portishead concert. With “Amigos em Portugal” Durutti Column acknowledged this relationship with the country and depicted the atmosphere of Lisbon, coming back to the fado mood shortly after when they released powerful dance track, “Fado“, featuring a sample of Amália Rodrigues’  “Povo que Lavas no Rio”.

Durutti Column were formed by Vini Reily and Bruce Mitchel in 1978. The name of the band comes from Buenaventura Durutti, the man who led a column of anarchist fighters during the Spanish Civil War. Their first album received the name of “The Return of Durutti column” and was inspired by a poster from Situationist International featuring that very same phrase. Friends of Tony Wilson and of a number of people who contributed for the big revolution in modern music in the eighties, from Ian Curtis to Morrisey, theirs has been a quiet revolution through sound. For more insight on this band check also the band’s albums “LC” or “The guitar and other machines”. 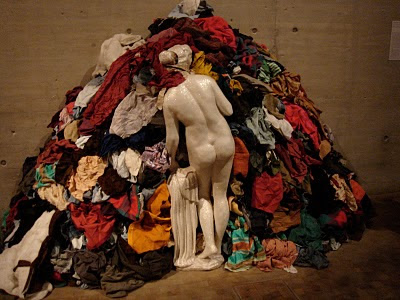 Some things remain in our memory forever. That’s the case of this installation under the name “Venus of the Rags” by Michelangelo Pistoletto, from 1967, and which was part of the exhibition  “True Romance – Allegories of Love from the Renaissance to the Present” in Vienna in November de 2007 at the Kunsthalle.