Nicolas Jaar, Todd Terje, Jazzanova and Michael Mayer provide the soundtrack for one of the grooviest festivals this summer on September 5 and 6 in one of Lisbon’s most beautiful parks.

Located on top of Lisbon’s main boulevard in the heart of the city, Parque Eduardo VII is home to the second edition of a festival of cool dance grooves that promises to keep you dancing from 2 p.m. to 11 p.m. after which the party will continue is associated venues. Under the name Lisb-On, the festival proposes a true garden of sounds and features a number of Portuguese and international musicians and DJs. Nicolas Jaar, the man with the mellow techno/house beats is the highlight of the first day, a Saturday that begins with the set of Isilda Sanches, one of Portugal’s best radio DJs.

On the second day, on September 6, things heat up even more considering the presence of grand names in dance music from German Nu-Jazz band Jazzanova, Norwegian DJ and producer Todd Terje and  Michael Mayer, one the biggest names of the Cologne scene. This second day begins with Rui Miguel Abreu, one of the most experienced Portuguese DJs with a great track record from music journalist to radio DJ, a man who knows it all and will keep you dancing to the coolest bests. After the gigs and DJ sets which will take the whole afternoon and go on until 11 p.m. the party goes on in a number of associated venues where a handful of DJs will be deejaying for your pleasure. For more information on the associated venues and on Lisb-On. Check here: http://lisb-on.pt/en/associados 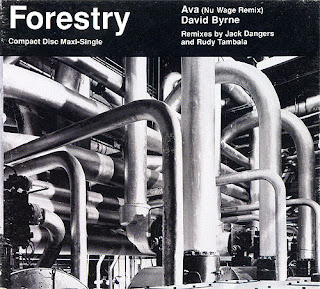 The Forest” is probably the best solo project by David Byrne, right after “My Life In The Bush Of Ghosts”, with Brian Eno. Composed for Robert Wilson’s eponymous play, “The Forest” is inspired in the Gilgamesh and is a true masterpiece where Byrne goes operatic at times, a thrilling emotional and atmospheric record.

But I knew some tracks from that “soundtrack” had been remixed under the name “Forestry” and after a long search I managed to find it and here it is in my hands, courtesy of someone in Oregon. The record features three remixes from “Ava” and finishes with the fantastic album version from “Machu Pichu”. All tracks were remixed by Jack Dangers from Meat Beat Manifesto and are a great addition to the original record, with modern industrial tunes, thus bringing it closer to the action of this play which takes place during the industrial revolution rather then in early Babylonian times, when Gilgamesh story first appeared, a story older than the Bible. Some people claim they can find traces of some episodes in the Bible in Gilgamesh’s epos.