The coolest boots on Earth come also in different colours. Here’s some suggestions to brighten up the grey and dull rainy days. If you retailer does not have this, have a word with him. If he can’t be bothered to sell these stunning Doc Martens boots, tell him to bugger off and buy them online. There’s thousands of sites with a huge selection at great prices. 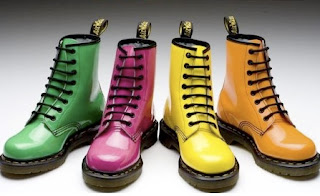