Lisbon Fashion Week celebrates its October edition under the motto Luz (Light) on a new venue, this time in the heart of one of Lisbon’s most beautiful parks thus shining again a light through fashion on iconic places and buildings in the Portuguese capital.

Twenty three fashion shows by both Portuguese designers and brands and a pop-up store offering national products mark the October edition of Moda Lisboa as the Lisbon Fashion Week is better known, the name of the association in charge of this event since 1991. Pavilion Carlos Lopes on Parque Eduardo VII is the new venue for the shows that start on Friday 6 with Patrick de Padua, a designer who focus on menswear with a twist for club nights and laidback days. The show goes on with Duarte, followed by Sangue Novo where new talents will show their designs, followed by Lidija Kolovrat who combines her fine art of print with garments with avant-garde attitude, the very same avant-garde penchant that is there in the jewels designed by Valentim Quaresma who follows next and who, after decades focusing mostly on metal has been betting recently on different materials. The first day ends with Ricardo Preto known for his  fine tailoring for men and women.

Saturday kicks off with Imauve + Carolina Machado followed by David Ferreira, the designer famed for his extravaganza on the catwalk and who caught the eye of Björk, the Icelandic gnome who wore one his dresses at a concert in London in 2016. Awaytomars show is scheduled for 4.30 P.M. where you will be given the opportunity to see the result of the joint work of this project that gathers creative minds from all over the world. Nuno Gama comes next, one of the most renowned menswear designers in the country and who cleverly combines his fine tailoring with national imagery for contemporary men. After this star of menswear comes Aleksandar Protic who sure knows how to design relaxed but elegant garments for women. Come October temperatures are usually still high for the beachwear of Brazilian brand Cia. Maritima. Ricardo Andrez comes next with his elegant and modern interpretations of menswear that have conquered the heats and mind in Spain where he was awarded both prizes and showed his collections before becoming a regular presence at Moda Lisboa. Christophe Sauvat comes after with his garments that attract a growing boho audience. Day two ends with Dino Alves, a designer famous for his regular work in the area of performing arts dressing a myriad of artists for number of shows, events and the lot.

Day three begins with Morecco followed by Nair Xavier x Diniz Cruz where we will be given the opportunity to see what has changed in Nair’s work considering her work with the brand Dielmar where she improved her tailoring skills. Around 4 P.M. shoes take centre stage with the show by shoe brand Eureka, a brand known for regularly inviting Portuguese designers to develop shoes for its stores and which offers great designs at affordable prices. Shows continue with Olga Noronha, followed by Nadir Tati and later with Luis Carvalho who focused on the 70/80’s new wave last season. The show by menswear store Mustra precedes the show by Filipe Faísca the designer who masters the fine art of making women look extremely sexy with his designs.

In-between shows Wonder Room gives you the opportunity to see and buy Portuguese design from men’s grooming by Antiga Barbearia de Bairro, shirts with a vintage touch by Daniela Ponto Final or groovy bags by Fluo just to name a few.

La Carola is the name of a purse brand created by two Madrid girls whose mission is to turn handbags in a remarkable accessory either in you daily routines or for a party as they state in their site www.la-carola.com/. 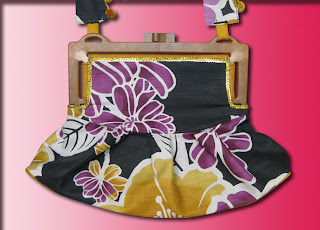 All the brand’s purses have a rounded bottom shape in common. But this is the only thing theu share in common, given that, as regards fabrics, imagination is the limit. Made of fabrics bought and found nearly everywhere, these purses have a vintage look and are all handmade, thus staying true to an increasing appealing trend, particularly in the Spanish capital where this idea was born. The best place to find these items is the aforementioned brand’s site. But there are also to be found at stores such as Lost People in Madrid or at Complementa in Barcelona. After the first edition of “The Brandery” in Barcelona, where we saw this brand for the first time, the  organisation of Pasarela Cibeles – Madrid Fashion Week acknowledged the two girl’s talent and we were then please to see them available for all the fashionistas present at the Setember 2010 edition.

Should you wish other kinds of fabrics and should you wish to turn the fabric of that lovely old grandmother’s sofa in a beautiful bag, we are glad to inform you that you can do so by contacting the brand and have a customised purse made.