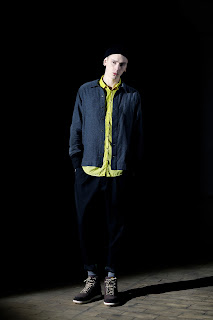 Delikatessen story is tale of modern geography, of a world with no boundaries and the tale of two creative minds: Stephen Hartog and Andrzej Lisowski. The first comes from Holland and was the mentor or of this project. The second comes from Poland and is the designer of these true delicacies. 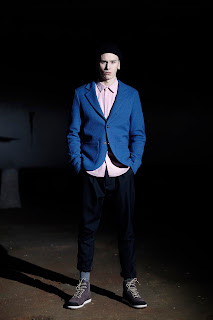 Both met by accident in Barcelona and 5 years after they would embark in a project they called Delikatessen, a brand betting on fine fabrics, like a chef who favours the most refined ingredientes. 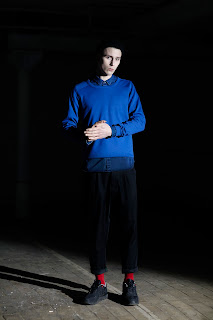 Delikatessen garments can be found in brick-and-mortar shops in Holland, Germany and Japan and in online shopping platforms. For the Autumn Winter 2013/14 they bet on exquisite fabrics from around the world like “silky Giza cottons, brushed Oxfords, precious boiled wools, Suvim cotton or Japanese chambres”. 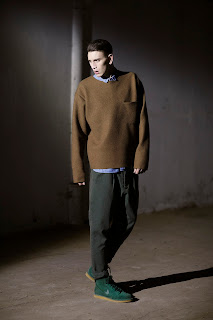 What is striking in Delikatessen is the elegant casual look and feel of their collections, the right choice for urban men who privilege comfort without giving up on style and quality, a brand with a true international touch.

“The certainty of chance” is by far the best song by The Divine Comedy, a song where they have brought the epic sound of emotion to a new level. But this text is not about them. I am just using the title of that track to acknowledge the fact that in life we are always, by chance or by hazard, coming across things that will be there forever with you – friends and great songs. The case of Lineas Albies and their respective members, Marieta and Pablo, falls within this category. I first met Marieta in Madrid during the Madrid Fashion Week where she was, for sometime, the perfect host for the international press gathering in Madrid twice a year to attend the fashion shows. There she was, beautiful and with a style of her own. She was there on the front row but she belonged in the catwalk. We started talking and I soon realized we had pretty much in common. We were both fascinated by a certain love of the underground and of some trends, especially in music. Little did I know that she was pretty active on the music front. The next day she invited us to visit a club in Madrid where she and her boyfriend would be deejaying that night. We took to the Malasaña district and minutes after entering Oui it felt like home. The crowd was great, friendly and cool and the bar owners knew what they were doing – Oui was the perfect club in town.

But the best was yet to come. There were sounds in the air that you couldn’t find anymore in most clubs, and after hearing one of my favourite tracks by the Shriekback, I decided that that was my club. After ordering a drink I took to the area was a black-haired guy in red pants preparing a DJ session. Tom Tom Club, Cabaret Voltaire, Lene Lovich, Talking Heads, B 52’s, Bowie, Brian Eno PIL but also great names such as Gary Numan, Alan Vega, The Residents, Yello, some of the best altenative German sounds from Andreas Dorau, DAF, Liaisons Dangereuses and modern sounds from acts such as Justice, Two Lone Swordsmen, Deat From Above, Cansei de Ser Sexy, Cobra Killers or chilean band Panico – the men was a living encyclopedia of modern music and it was as if he had gone through my record collection and was now playing them all. Now and then a tall girl whose hair reminded a character from a Enki Bilal’s comics would approach him a whisper to his ear after which she would dance in her graciously wild manner next to him. The two were brilliant and their music taste a refined one and no wonder they did such good music. The knew all the bands I loved and I was even more astonished when they mentioned that the writer Amos Tutuola, the guy who wrote the book “My Life In the Bush of Ghosts” and which had inspired the seminal record by Byrne/Eno.  The little stage at Oui where Lineas Albies were deejaying was always a crowded one. Everyone wanted to talk to them, to kiss them, embrace them, say hi and the bar owner had to constantly ask people to come down. They were indeed a loved and a lovely pair, both friendly and with a refined music taste. I have danced the whole night and for two year this was my club in Madrid and Lineas have become my favourite Spanish act.

The next day, I wanted to find out more about these two, who, aside from deejaying, had also their own band. I turned my computer and visited their page on MySpace. I was astonished. They had wonderful songs and an astonishing body of visual work. “Double Captain Sensitive” from their album “Taxidermista” was the video that first caught my attention – a great guitar sound and Pablo and Marieta delivering the perfect vocals. After hearing “Relaxico Espilibidoso” I said to myself “this song will go directly to my playlist right next to my favourite album of all times, “My life in the Bush of ghosts” by Brian Eno/David Byrne. And it reminded me also of “Caes de Crómio” a superb track by a Portuguese band called Mão Morta . Lineas were from Madrid but they could have come from London, Berlin, Lisbon or New York. I knew they would fit perfectly in the Lisbon scene and I did not give yet the idea of bringing them to Lisbon. With such great sounds and look I grew addicted to their sound. It was great to know a band with a wide-ranging set of references coming from Madrid, Spain, a country were the national music is often to much self-centered in their own culture. These guys deserved the world and Madrid was too small for them, plus they had the advantage of singing in English. The world is not fair and TV channels did not know what they were missing for not airing something as fabulous as their video “Lucky Town”. In this video you can clearly see that image is also a relevant part of their work. They concert flyers were considered true works of art to such an extent that they were asked to show them in one of Moscows most important modern art museums.

After many visits to Madrid one day they gave me the privilege of being one of the first to listen to their first album in Spanish. I took to their place right in the centre of Madrid to hear the record which could assure their breakthrough in the Spanish speaking world. “Album Rosa” is a beautiful pop album with great danceable songs like “Chica Chica Boom, “No pares de Danzar”, or the filigree-like “Delirios de dignidad”. “El Cuervo, nunca mas” is a fine track of wild electro. These days Lineas Albies are living in Mexico. They felt the need to expand their horizons. That wish was already there in the song “Experiencias Nuevas”. Writing is Spanish was a wise move, but I hope they deicide to sing some songs in English. They are now conquering the new world with their sounds and I do hope to see them in the major music festivals delivering their wild show and proving that they are one of the best things that has come out of Spain in recent times, mastering pop, rock, electro, video, art and, above all, staging ravaging shows. Listen to “No ha mas” and you will understand what I mean.
And follow their advise in “Un Cuento Delirante” – “life is delirious… jump, fight, fuck, sing”.
For further information please visit http://www.lineasalbies.com/