Underwold teamed up with movie director Danny Boyle (Trainspotting and Slumdog Millionaire) and wrote the song Isles of Wonder inspired in Caliban’s Dream from Shakespeare’s The Tempest for the London 2012 Olympics Opening Ceremony . See below the excerpt from Shakespeare’s that best seems to have set the tone for the song and the show:

Be not afeard; the isle is full of noises,
Sounds, and sweet airs, that give delight and hurt not.
Sometimes a thousand twangling instruments
Will hum about mine ears; and sometime voices
That, if I then had waked after long sleep,
Will make me sleep again; and then in dreaming,
The clouds methought would open, and show riches
Ready to drop upon me, that when I wakedI cried to dream again.

Some claim the ceremony was somehow parochial. It was indeed a great show of Britishness rather than a show of Worldliness. But then again, occasions like these are there to show the host city’s glory.
20 years ago Barcelona used the Olympics to propel both the region and the Catalan language and relied on the powerful scenic imagery of la Fura dels Baus.
Hitler, dangerously but brilliantly used the art and craft of Leni Riefenstahl to film the Germania dream and the Olympics in Munich in what is until now probably one of the most beautiful images of olympic athletes in motion.
Danny Boyle cleverly used the British imagery and did not forget one of the biggest British legacies – Pop culture. Hey Jude was consensually used to please mothers and grandmothers, but we do have to thank Boyle for having included Bowie’s song Heroes, hoping it will soon replace the boring “We are the champions” in major events. 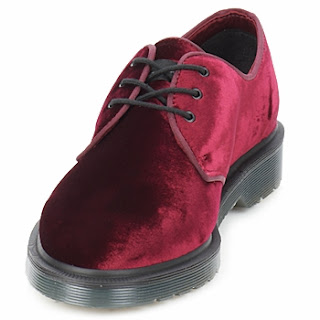 After a beautiful pair of silver Doc Martens which I saw in New York and was stupid enough not to buy them I was astonished by this pair of great Docs in cherry velvet. This 50-year old brand continues to surprise us with new models. Upon entering the site of Madrid Fashion Week this morning I was fascinated by a pair of black docs with red soles. But moments later I felt like stealing someone these fabulous shoes -should you see someone running barefoot in the streets of Madrid in the cold Winter days, well that’s because I stole the poor bugger his shoes.