More than 25 years after his first appearances as musician, DJ and remixer and later as world acclaimed artist, Moby returns this year with another project, ‘Moby & the Void Pacific Choir’ where he tries once again to make sense of this obsessed world.

“These systems are falling” is Moby’s new album and marks his return in 2016. Fast, loud and epic, the sound in the new record brings us back to the wild energy of Moby’s early rave albums that secured his reputation as one the best musicians and producers in the dance scene. In the early nineties he combined his work as musician with that of DJ having remixed songs from bands and artists such as B 52’s, John Lydon, Bowie, Eno or Blur. Years passed and in 1999 he would become one of the most popular artists on the planet thanks to the album “Play” and mellow melodies like “Porcelain”, “Why does my heart feel so bad” or “Natural Blues”. His planetary success made him a household name and expanded his reputation as a musician. Now, more than 25 years after his first appearances as musician, DJ and remixer, the man everybody would love to invite for a drink, instead of inviting us for tea, bringing out his best tea set, prefers to break the china through sound, hitting us hard with powerful sounds and poignant messages. “These systems are falling” comes with a handful of videos that are there to help convey his message, particularly “Are you lost in the world like me” where he draws our attention to this phone-obsessed world. This record follows the release of his book “Porcelain: a memoir” released this Spring and where he tells of his life in New York City, from “the broken and dirty city to the bizarre and stratospherically expensive city it has become”. Moby, the nicest guy around, comes back in force in 2016. He is someone like us, someone we clearly identify with. “I’m not a cool narrator or a disaffected anti-hero” he wrote on his book. “I’m just a clueless and panicked human being trying to make sense of the strange world I find myself”, adding that “I tried to be as honest as I could”. The nice thing about Moby is that we believe every word he says.

On the third day of Madrid Fashion Week we still get the idea that there is a lot to be done in order do get the two countries in the Iberian Peninsula closer to eachother. So far, only one Portuguese designer has made it to the Madrid Fashion Week. His name is Ricardo Andrez and the reason why he was able to show his collections in Madrid is because he presented the best collection in Barcelona, in a contest for young designers. As for Portugal. only Custo Barcelona and Amaya Arzuaga showed their stuff in the Lisbon Fashion Week. Hopefully things will change one day and Madrid will be able to see the work of Portuguese designers such as Luis Buchinho, Ana Salazar, José António Tenente, Maria Gambina, Alves/Gonçalves or Felipe Oliveira Baptista; as for Lisbon, it would be great to see there the wonderful work of spanish designers such as Sita Murt, Davidelfin, Roberto Verino, Nicolás Vaudelet  or Duyos. 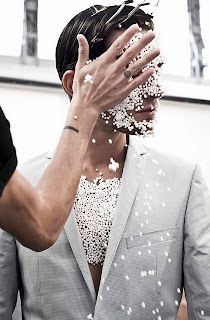