Zaha Hadid, of the world’s most renowned architects died today at the age of 65 after she contracted bronchitis and suffered a sudden heart attack while being treated in hospital, official sources said today.

Cities in space are still a vision of the future, but should there be one or two or many they will probably be inspired in the dreamy designs of Zaha Hadid who died today at the age of 65 of a heart attack while being treated in Miami after having contracted bronchitis. Famous for her designs with curved lines, a distinguishing feature of her work, she left her mark all over the world, from Abu Dhabi to Spain, from London to Taiwan. London was her home where she started working as an architect in 1972 and where she established her practice in 1979. A true woman of the world, she travelled a lot and retained influences that would later materialize in iconic buildings and works. One of her major influences was the Brazilian architect Oscar Niemeyer whom she considered a genius. “He was a virtuous of space. He had a natural talent for sensuality”, she said once in interview to El Pais, further adding that “many architects experiment with forms but he was more ambitious; he created with concrete forms that are apparently liquid”.

Vitra Fire Station in Weil Am Rhein, in Germany was the project that gave her international recognition. In 2004 she was the first woman to be awarded the Pritzker Prize. Other public recognitions followed and along with her projects she had also a pretty active academic role lecturing in a number of universities in the word. Her career was not exempt from criticism, not so much as regards her style. When invited by Japan to design the 2020 Olympic Stadium in Tokyo she was strongly criticized by Japanese architects but she dismissed it claiming that they did not want a foreigner architect to design a national stadium. Stadiums became actually a headache for Hadid who would be charged for having done nothing to prevent the number of deaths of migrants during the building and construction of the Al Walkrah stadium in Qatar whose accusations she vehemently denied claiming hat there had been no such deaths. But criticism aside, which she quickly reacted to, Zaha Hadid left her mark nearly everywhere in the world of design from buildings to bridges through shoes with her distinguishing mark, a stage design for the British band Pet Shop Boys or jewellery for the Danish brand George Jensen, just to name a few.

Italian shoes, though wonderfully crafted, can be boring, and going through the classic Italian shoe collections in the major hight street shops is often a loss of time, as what you get is just small variations of classic leather brogues. The same goes for the fashion editorials in most men’s magazines depicting boring suits and shirts ans shoes. Hence, it was with a great sigh of relief that I came across this news shoes by Prada for the Spring Summer collection 2011. Nice job! It does bring me back to the days when the cities where full of people with attitude and when creepers were the hipest thing to put on and which are now back and were used in the latest Sping Summer collection by the Portuguese designer Maria Gambina at the Lisbon Fashion Week as pictured below. 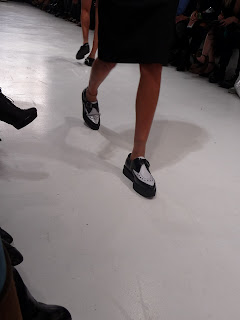