What might sound for many a true heresy is for many a long awaited novelty. 140 years after Jacob Davis and company founder Levi Strauss invented and patented this riveted piece of clothing in 1873, the famous Levi’s 501 now come in many colours, thus breaking the 140-year old blue jean tradition that made this brand a true icon.

As of this Spring, and in order to celebrate its anniversary, this American brand will feature for the first time a collection in four different colours: ivy green, true chino, chalk blue and mineral red.

With this collection the brand thus come closer to general trend for this Spring/Summer which will be blooming with colour from flashy neon to more discrete pastel and where shades of blue, orange and yellow predominate.

The brand has also introduced some changes in this new generation of 501 Levi’s, particularly a more adjusted silhouette in the waist and larger pockets, thus responding to the needs of those who cannot leave home without their smartphones. 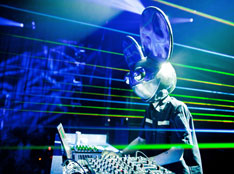 Cape Town, Tokyo, São Paulo, and Barcelona. Sónar, the huge acclaimed electronic and advanced arts festival will take place in four four different cities in 2012. These are the cities selected for this year after previous events in places such as United States, South Korea, Germany, Mexico, Switzerland, Portugal, the United Kingdom or Argentina in a total of 31 events worldwide.
The first Sónar festival to be held this year outside the Spanish borders will take place in Cape Town and feature names such as Modeselektor, Byetone or Brodinski, along with local South African names. This African edition of “A Taste of Sónar” will be hosted in collaboration with the event Design Indaba and will take place on March the 2nd.
The next stop in Sonar’s world adventure will be Tokyo and will feature names such as Squarepusher or The Cinematic Orchestra or Vincent Gallo and other Japanese artists.
São Paulo, the booming Brazilian city will receive sonar for the first time on May 11 and 12. According to this festival’s organisation, this will be “the largest of all the events organized by Sónar outside Barcelona”. This festival will feature names such as Mogwai, Jeff Mills, Squarepusher, Björk, Justice, Alva Noto & Ryuichi Sakamoto, James Blake, Four Tet and Modeselektor.
In June Sónar will return home and take place as usual in the Catalan city of Barcelona in the usual Sonar Day venues at the cultural centre of Barcelona CCCB and Sónar Night at Fira Barcelona. The names confirmed so far for Barcelona are Fatboy Slim, Hot Chip, Richie Hawtin, Deadmaus or James Blake among others.
This important festival has an attendance of 90 thousand people per edition. This is limit set by the organisation. Hence book in advance, buy the ticket, and book a hotel room or a holiday apartment so as not to miss a bit of this festival which attracts a huge crowd with an average turnout of 40 per cent foreigners who flock to Barcelona from all corners of the world.