Ana by herself is the new brand name by the Portuguese pioneer of modern fashion, formerly known as Ana Salazar. This information was confirmed by the designer herself. This announcement is generating great expectation given her utmost important role in Portuguese fashion and after a couple of years of absence from the Portuguese catwalks.

Ana Salazar delighted Portuguese consumers with her off-beat selections back in the 70’s and later with her own avant-garde creations, hosted remarkable fashion shows and has influenced great many designers in Portugal. Hence the announcement of a new brand comes as a pleasant surprise for those who have been missing her.

The first items from Ana’s collection under a new name can be found at her store located in Av. de Roma. We promise to keep you updated on further developments around the new projects by the woman and designer who changed the face of fashion in Portugal and who, as everything points out, is set to make a stong comeback. 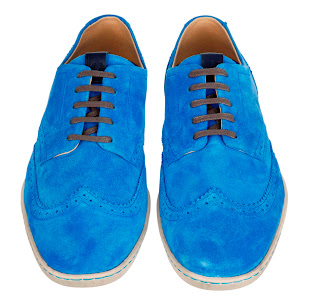 Spring is around the corner with the promise of clear blue skies. To go with it and to match the joyful mood of the season Fred Perry has just launched this pair of Jacobs shoes. With two discrete rubber stitched soles, they come with molded shoe soles to provide additional comfort. On sale at your local retailer for € 90 euros. Aside from these Jacobs pictured above you can also go for the waxed leather model in brown and nude with orange laces. And if you want to be bold, used the orange laces with these blue suede shoes and there you go, you will be wearing the tangerine colour of the coming season in your shoes.