Surrender to cork!! This could be the leit motiv behind this promotional video starring British fashion journalist Jemima Daisy Compton and Angela Giltrap, australian fashion journalist based in New York, filmed during the Lisbon Fashion Week on October 2012 and which is there to publicise Pelcor’s range of cork products from bags to umbrellas, caps, hats and a myriad of products made by this company based in the Algarve.
After many years making pretty original products with this typically Mediterranean raw material and the typical beige and brown colour of cork, Pelcor decided to enter the fashion segment by coming up with a whole range of new colours and models, thus  creating true it bags made with the very same cork used in the production of Moet & Chandon champagne cork stoppers. 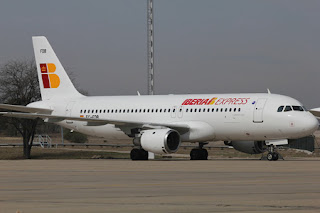 Should you be tomorrow at the airports of Seville, Alicante, Malaga or Mallorca, you wil see a new airline landing or taking off under the brand name Iberia Express. These four cities will be the first overed by the new Iberia venture.
The new Spanish airline will focus on cheaper and competitive ticktes and  will be covering the cities where Iberia already flies to. In half a year and according to Iberia’s chairman Antonio Vazques, “Iberia Express will be covering 20 destinations in Spain and Europe with its 14 planes”.
Iberia Express flights will operate within the Iberia network and provide connections with other Iberia flights and will also be part of the OneWorld alliance. It remains to be seen whether this company will be able to compete in an already crowded market and where Iberia has already an affiliated low cost company, Vueling, which operates to major destinations in Europe.