They do not like to state where they’re from, but we suspect they are from north of Portugal. But that doesn’t matter. Listening to their sound, one could say they have engaged in serious binge drinking at the 4AD label or at WARP, as their sound resonates with the sounds from bands signing to these two British labels.
Listening to their track “Fernanda” it feels as if Robin Guthrie from Cocteau Twins had been invited to play along. They claim they are influenced by names such as Steve Reich and Frank Zappa. But we point to names such as Brian Eno/David Byrne or Jansen/Barbieri/Karn with pints of Beanfield, Seefeel, Lali Puna or even Future Sound of London as possible encounters, musicians who might have led to their own particular sound. But then again Trendenz could be entirely wrong and they probably do not even listen to such names. They ironically claim they only know Lali Puna, which we do not believe as their sound seems indeed to be rather informed and cultured. Trendenz today came across yet another masterpiece by Sensible Soccers, “Sofrendo por você”, a great danceable track by this groovy bunch of people “who play a very cute football with great affection”. 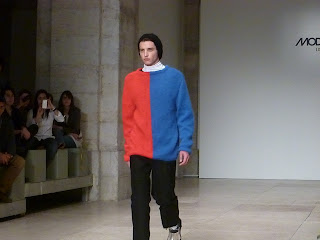 Maria Gambina is having a rather busy month of March. This fashion designer, born in and living in the creative hotspot of OPorto, presented her Fall/Winter collection at the Lisbon Fashion Week and crossed Europe from west to the east where she showed yesterday her collection at the Ukrainian Fashion Week in Kiev. Her presence is part of a protocol between this eastern fashion and Moda Lisboa. The latter has also a protocol with Polish Fashion Week and is now working towards the establishment of partnerships with other fashion week, thus stimulating the exchange of designers. 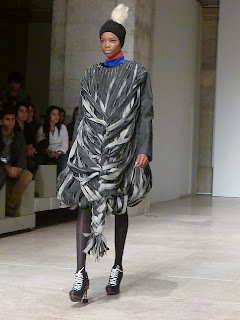 As for Gamina, this is a further opportunity to show “Otherness” a collection inspired by the world and imagery of hockey. This world of horses and hockey was visible in the long hanging wool locks which the designer also replicated in long printed shirts. Large two-tone jumpers in blue and red, outfits with oversized shapes combined with short skirts, long overcoats in black with white stripes at the bottom and Mohawk-punkish styling take us also to a universe close to a certain new-punk attitude. This movement from the early eighties inspired this designer who, influenced by the voice and imagery of The Cocteau Twins, decided to apply some colour patterns that bring us back to the atmosphere of cult label 4AD, but also to the romantic music textures of The Durutti Column and the predominant black in most outfits lead us to the dark wave sounds of Anne Clark. 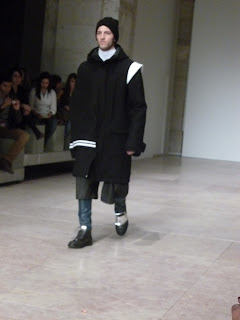 Music has been a source of inspiration for Maria Gambina. But a remarkable feature in her work is her use of colour in a country like Portugal where most designers do not usually go for strong colours. This was indeed a good match in this Ukrainian Fashion Week which relied also on the presence of the queen of übercolour, the Spanish fashion designer Agatha Ruiz de la Prada.