Trendenz was highly surprised by both the song and the video “Oração” by A Banda Mais Bonita da Cidade, one of the best bands to emerge from the Brazilian music scene. The song was a huge succes and weeks after its realease on Youtube more than one million people had watched this video on that platform.
Today, September 29, Madrid is hosting the so-called Youfest, the Festival for the Youtube Genereation which began yesterday and ended with Primal Scream. Today’s shows feature Buraka Som Sistema and Underworld, along with A Banda Mais Bonita da Cidade who will be performing their most iconic tracks, most of them a well succeeded reinterpretation of Brazilian songs from some of the country’s most talented composers.
After Madrid it will Lisbon’s turn to see them once again on October 4 at Sala TMN and to listen live songs like “Solitária” a song of both despair and hope, the funny “Mimimi” and the eternal classic Oração, among others. 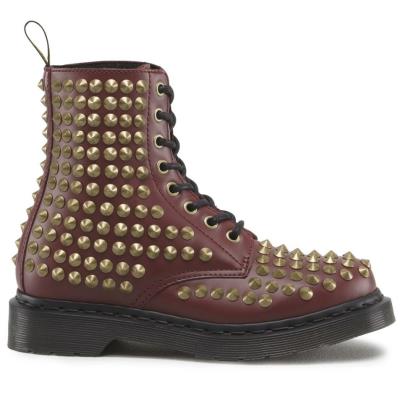 Here’s the brandnew Doc Martens spike, the right shoes for people with attitude.
Contrary to most brands who have come up with models with spikes and which have absolutely nothing to do with it, at least this one is closely related to the initial spirit of punk and new punk, spikes and chains.
This is the new addition  to this British brand which has been relentlessly launching new models in recent years, thus keeping its spirit alive.
Have a word with your local retailer or simply get them from their online store at http://store.drmartens.co.uk/p-7798-dr-martens-spike-boot.aspx