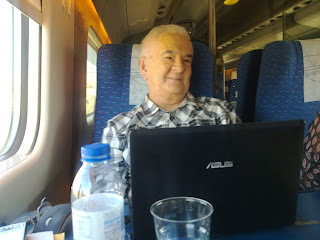 Most of your will remember the man only because of the hit single “Tainted Love” which he recorded with Soft Cell, the band he formed with Dave Ball. The band split before the nineties, got back together for a brief reunion and an album in 2001, and the two members decided to embark on their own projects. Dave Ball formed the electronic dance band The Grid (whose remix of “Waifs and Straifs” we highly recommend) and whose album “456” is a must-have in every record collection.
As for Marc Almond, he started a solo career, launching a myriad of albums with superb pop songs, flirted with French and Russian music and has been performing solo ever since. The album “Tenement Symphony” or the single “Glorious” are perhaps the greatest living proof of Marc Almond skills.
Trendenz saw the man in Cologne in 1989 at the Saartory Saal during “The Stars We Are” tour  where Marc proved he is indeed an master of performance.
For those who never had the chance to seeu him live, “12 years of tears” is a astonishing document live at the Royal Albert Hall, featuring Marc Almond’s own songs and some Soft Cell classics.
In this world of fast information it is good to stop a while and look back in delight at the work of someone who has given a great contribution to the story of Pop music throughout these years.
http://www.amazon.com/12-Years-Tears-Royal-Albert/dp/B000K2Q7VY/ref=sr_1_1?s=music&ie=UTF8&qid=1358770272&sr=1-1&keywords=12+Years+of+Tears+-+Live+dvd