Fashion blog The Selvy leads us in a journey through the archives of American brand Coach led by the Archivist, Jed. Should you visit the Coach building in Lower Manhattan do not miss the opportunity to seethis true museum. Put on your white gloves in order not to damage the items on display, start the visit led by Jed and check the numerous iconic bags.
The brand regularly digs in this huge archive to look for inspiration or to relaunch iconic models which have made this brand a must-have, not only in the USA but in the whole world as this brand has pursued a relentless expansion plan and its items can now be found in major cities throughout the world. Should you be or visit Lisbon, check the nicely decorated brand’s corner at the department store El Corte Inglés. 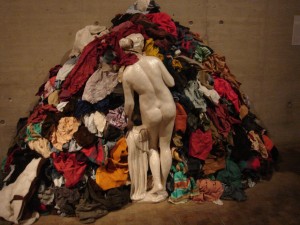 Street style is increasingly stealing the limelight at fashion shows, as if a bunch of kids and not-so-young bystanders in fast fashion and odd looks were far more important than what is shown on the catwalk. Everybody, from the general press to the fashion press is engaged in this glorification of street style to the detriment of a true and informed fashion coverage.

It’s 11 a.m. and outside Petit Palais in Paris an odd number of Asians, with modern cameras catch the attention of professional photographers. Some of these people have composed the most fashionable and expensive looks just for the occasion. Some of them are bloggers, others just people trying to enter somehow a word they see as glitzy and beautiful or are there just to get a glimpse. In Prada shoes, H&M trousers and Zara tops they will be the ones featured in the pages of magazines and newspapers as if they were the true trendsetters which more often so they are absolutely not. Should you wish to sense the atmosphere of the place and to plunge in the world of a certain designer, focus rather on the people inside, on the changing human landscape at each show as they are the ones you can better identify with the brand. As for the bunch wandareing outside, they wont tell you much about the designer, the show or the city where the fashion show is being hosted, contrary to what some witty texts and captions attached in the press might suggest, some of them written by people whose main focus is to portray fashion and just something vain and ridiculous. 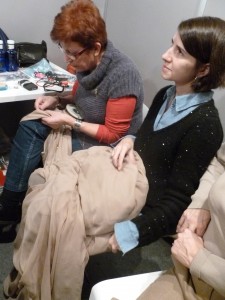 It’s 11.30 and the designer is working hard and hastily preparing her fashion show. The room is already filled with guests, press and buyers. Some are wearing items from the designer’s past or current collection about to be shown. It is up for those covering the show to talk to them, ask them what they are wearing and why they buy and wear the designer’s stuff. Photos will be taken and send to the newsroom to make the grand picture of the show and the garments. For the reader it is important to see both the looks being shown and to know the kind of people wearing the garments from that particular designer. But once you buy the magazine or the newspaper or read the blog days or weeks after quite often you get to see nothing, zero, zilch, nada,  from the designer. Instead you will get two or three pages filled with photos from young people dressed extravagant or wrong with ironic or not-so-funny captions attached. And suddenly the work of dozens of people working with and for the designer and the work of those who took months preparing the fashion shows vanishes in thin air.