“Blue Monday” the powerful track by New Order celebrates 30 years today. This would be one of the best-selling 12″ of all times and with this single New Order invaded the dancefloors around the globe with an extremely danceable track that pleased both rock and disco fans.
This somehow robotic track which was meant to be played on stage without instruments, if needed, marked the rise of New Order to stardom, after the end of Joy Division and a new beginning as New Order after the death of Ian Curtis. “Movement”, the first album by the band was there to mark a turning point for the former Joy Division members and singles like “Ceremony” “Everything’s Gone Green” and “Temptation” rejoiced the indie and alternative dance crowds.
But “Blue Monday” and later “Confusion” would reach a new and bigger audience. Both 12″ inches were influenced by the sounds coming from the streets of America, when Chicago and New York met Düsseldof and the kling klangs of Kraftwerk.
30 years after the beats and melody of Blue Monday sound perfectly updated and to mark the occasion, John Digweed and Nick Muir have just released a new remix of this track. 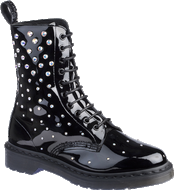 Doc Martens keeps surprising us with new models. After having launched velvet Docs and combined creepers with Doc Martens soles, this brand is now launching a collection with Swarowski Elements applied manually to both shoes and boots. These upper part of these new models is made with calf leather. The result is a stunning pair of boots with crystals all over. For those looking for a more discrete option, Doc Martens have launched a pair of shoes with a shiny tip and discrete crystals in the back of the shoes.
And to make it even more special, these models come in all-black shoes boxes with silver details, paper tissue and embroidered shoe bag. For Prices range from 325 dollars for the pair of boots pictured here or 125 for the shoes. 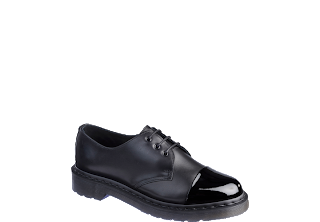