Think of Arcade Fire or I’m From Barcelona, mix it with tropical melodies and lyrics and rock anthems and you will get the perfect mix by this bunch of cool modern Brazilians. Formed two years ago A Banda Mais Bonita Da Cidade (The Most Beautiful Band In Town) began researching the work by some popular Brazilian composeres, mixing brazilian lyrics and melodies with recent rock sounds. The result is this astonishing song for the cool days of Summer. After discovering recent acts such as Cansei de Ser Sexy, A Banda Mais Bonita da Cidade could be a sure bet to ignite the audiences in the coming summer open air festivals. File under cool modern Brazlians, next to the sounds of Mangue Beat, Fernanda Abreu or the great Brazilian Dj Camilo Rocha, the man who launched the compilation “Música Electrônica do Brasil” for the magazine Trip do Brazil in the mid-90’s and who changed then completely my perception on Brazilian music. 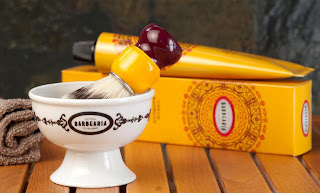 Shaving can be much more fun with the products and objects by this Portuguese brand which brings you back to the ancient barbershops just around the corner. Shaving brushes, eau de cologne, shaving cream and the new bowl are just some of the objects by this brand owned by the company 100ML. On sale in Portugal and everywhere around the world in selected shops.